As of SDK version 0.13.47, the behaviour of preconsuming has changed. It is no longer an alias for a standard choice, but has the behaviour of a nonconsuming choice with an archive self as the first sub-action. There is no difference in behaviour, except that the privacy implications are subtly different. Observers see all consequences of a standard choice, whereas they only see the archive subaction of a preconsuming choice.

Daml guarantees that any Offer instance on which a Withdraw choice has been exercised is thereafter ‘inactive’—meaning any attempts to exercise further choices on that instance must fail. Exercising a Withdraw choice is said to ‘archive’ the contract.

It's sometimes the case though that exercising a choice on a contract instance does not imply the instance should be archived. For such a choice, we can indicate that with a nonconsuming annotation. To illustrate, here's a simple model of a leasing agreement between a landlord and tenant. The landlord may like to, say, extend to the tenant the opportunity to ‘refer a friend’ in order to obtain a cash-premium—so we write that into the contract like so: 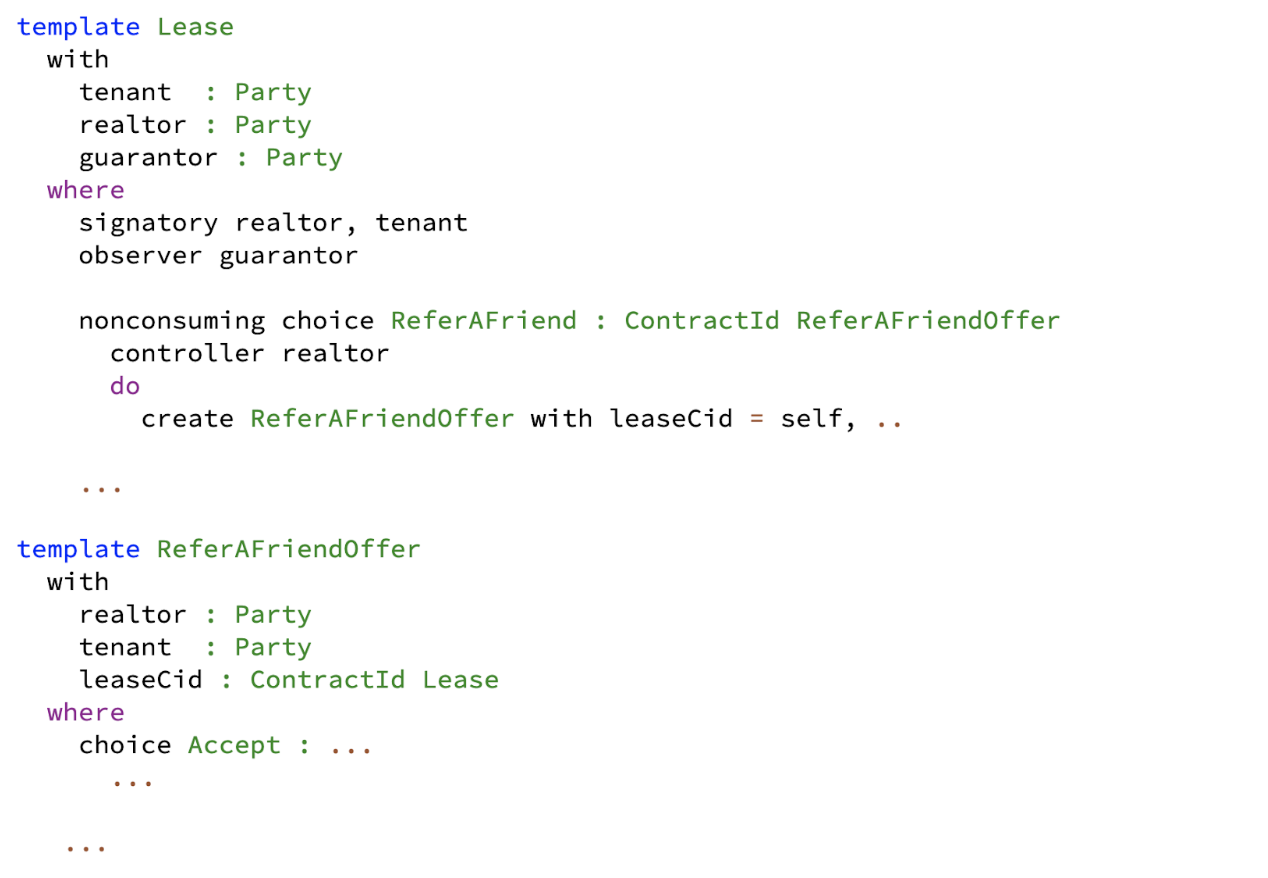 In this case, no matter how many times a ReferAFriend choice is exercised on a Lease contract instance, that lease contract remains active.

Suppose we wish to write a clause into our Lease agreement allowing for its termination. Put yourself in the role of the developer contracted by the realtor to model their business process that mandates that, on termination, not only is the agreement archived but also a ReferAFriendOffer is issued. That would lead us to try to write something like the following.

In fact, the newly introduced preconsuming choice annotation is provided for those that wish to be explicit in their definitions. That is,

mean the same thing and, as we have seen, the semantics of this archival scheme hinder our ability to naturally express the business process.

What's lacking here is a choice archival scheme with slightly different semantics—one that auto-archives its contract but not before the choice body has been executed. This is provided for by the newly added postconsuming annotation. Now we have the tools to express our intent.

There is one subtlety left to explain regarding privacy rules with respect to post-consuming choices. Like non-consuming choices, contracts created in the choice body are known only to the signatories and controllers of the contracts and not made known to the observers of the contract on which the choice was exercised. That means, in terms of the example, a guarantor will not be privy to the creation of a ReferAFriendOffer raised by exercising Terminate on a lease but, as a stakeholder, will be privy to the archiving of the Lease itself.

A remark for ledger writers

In practice, Daml-LF only has pre-consuming choices. Post-consuming choices are implemented by code generation during the Daml to Daml-LF desugaring process. Don't worry if this remark doesn't mean anything to you as a Daml developer—you can safely ignore it!

Join the community and download the Daml SDK at daml.com

Shayne joined Digital Asset’s language engineering team in 2018 where he works on the Daml compiler. Shayne has 20+ years experience with C++ and OCaml. He has a deep understanding of programming language theory and a wealth of experience in finance and building language based-products. In a previous role with Bloomberg, Shayne led the team that built the BLAN language for modeling exotic derivative securities. @shayne_fletcher

Daml does yoga: an introduction to flexible controllers

Parties and users in Daml 2.0