Asset tokenization with Daml: Solutions and beyond

Following past market shifts to immobilize and later dematerialize assets with the goal of enhancing trading efficiency, most assets have effectively been digital for more than 20 years. Since one of the strongest driving factors for asset tokenization is enhanced liquidity, the first class of asset-backed tokens belongs to assets that are known for limitations in liquidity – derivatives, real estate, collectables, private equity, and the like. What makes asset tokenization appealing is its round-the-clock trading capabilities. It also breaks down geographical barriers, enhances price discovery, and reduces price volatility.

The advantages to tokenization

Tokenization offers two fundamental advancements over the landscape of already-digital dematerialized assets built with historic tech stacks. First, the capacity to bake full lifecycle automation onto the tokenized asset itself, including the rights and obligations of each of the ecosystem of participants across the market throughout the life of the asset; and second, the opportunity to wire traceability and provenance into the asset.

With Daml, any asset class can be accurately tokenized as the bundle of rights and obligations for all involved parties within a specific ecosystem and across the full lifecycle of that asset, with appropriate regulatory and compliance guardrails in place.

Watch the video to understand how specifically Daml is used in asset tokenization.

As discussed in the video, an asset-backed token should represent a redeemable claim to a security, and derives its value from that claim. Holding the token is equivalent to owning a claim to the asset, and ownership of the claim should be freely transferable. In these respects, tokens mimic cash:

In reality, the most frequent asset tokenization issue enterprises face is that most assets are not bearer instruments. Ownership records are kept and controlled by regulated entities recognised by law. Ownership kept on that regulated ledger is legally enforceable, and restrictions to ownership and transfers often apply. Assets derive their value from the legally enforceable set of rights they bestow upon their owner.

Asset tokenization examples: The good and the bad

Real estate is a good example of an asset and a bad use case for tokenization — specifically because it is not a bearer instrument. If I lose the key to my house, I don’t lose ownership. Similarly, if I turned up on someone else’s property and demanded forfeiture while waving a paper land title, I would likely be arrested for forgery or theft.

Real estate ownership is controlled by land registries, and only the relevant land registry’s ledger is legally enforceable. In many places, there are restrictions on who may own real estate and to what degree it is fungible and transferable.

So, if I lost the private key to my real estate token, I would similarly not lose ownership of my house. It seems inconceivable that a judge would evict a local homeowner in favor of a pseudo-anonymous, foreign token holder. It would be especially dubious if that token holder gained control through means outside the court’s jurisdiction (nefarious or otherwise). This begs the question: If your goal is to maximally decentralize this type of asset, what protections did your token holder receive for the cost of implementation complexity?

This is where smart contracts come in. They aim to encode the specific rights that ownership of an asset grants to the owner, and encode the rules and processes around those rights.

Daml, Digital Asset’s core technology, is the answer to all of these issues. Daml. It is the leading platform for building, executing, and running sophisticated, multi-party applications. It extracts and simplifies business processes to make data accessible and optimizes workflows using smart contracts.

A concise language for records and rights

Daml has a rich data definition language to describe records, as well as the rights parties have according to these records. For example, the below representation of ownership of a piece of land gives the owner the right to request sub-division of the plot. 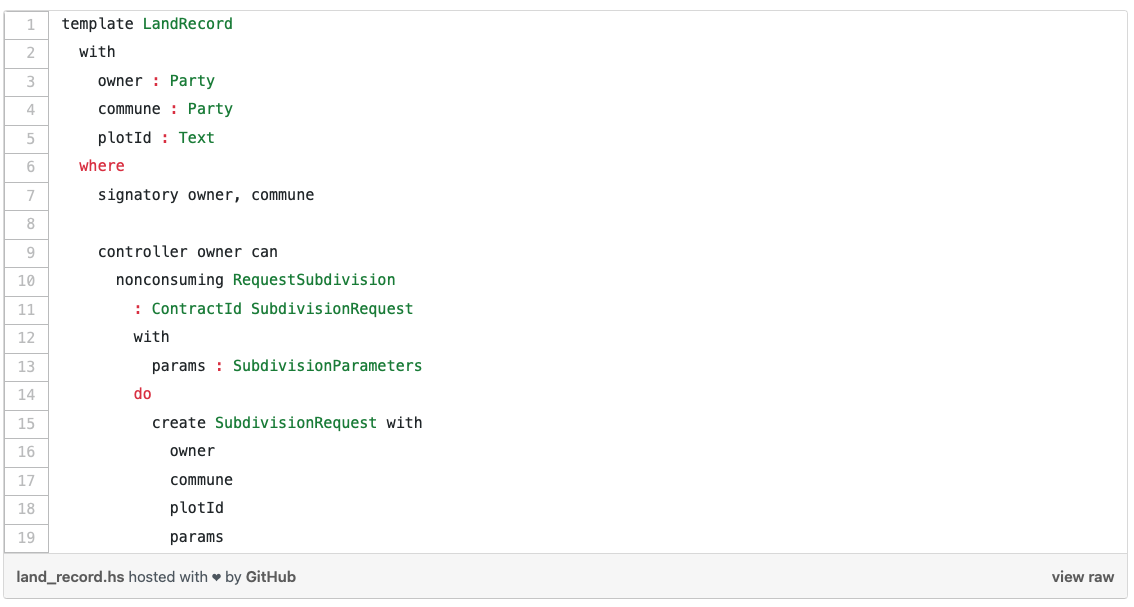 The above contract is between a land owner and their commune. Should the contract be erroneous, those parties should be able to amend it. Daml has a clean concept of data control through signatories. The owner and the commune can jointly make changes to an ownership record. 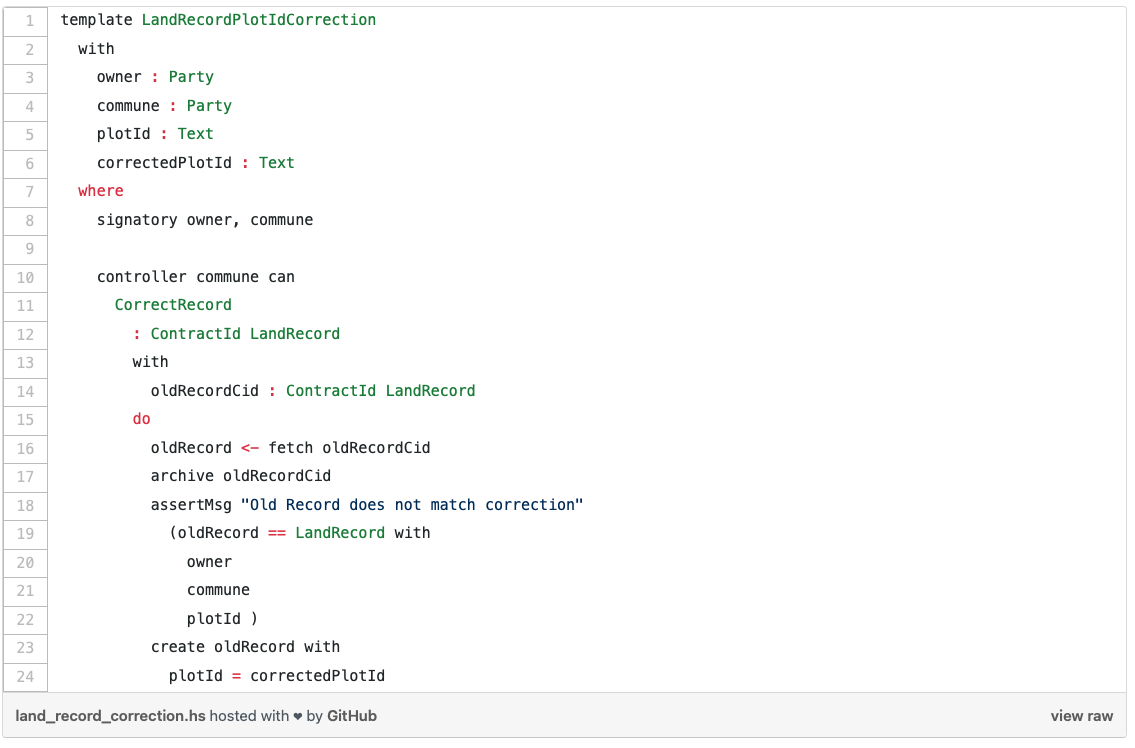 Using this add-on contract, the commune and land owner may decide to correct a record by mutual agreement, in a completely compositional fashion. “Upgrading” or “correcting” of contracts does not need to be planned for. A clear concept of data ownership makes it work out of the box. This is in stark contrast to public blockchains, which should contain permissionless smart contracts specifically designed to be minimally modifiable — if at all.

The Daml ledger model specifies precisely who has the right to see data and follows a small set of principles to derive visibility rules:

These rules maximize privacy, while ensuring that any party ends up with a fully valid view of the ledger. In addition, everyone is guaranteed to be informed of the state of contracts in which they hold a stake.

The Daml quickstart guide gives a powerful example of subtransaction privacy using a simple trade model. In Daml, it is possible to atomically swap assets guaranteed by two institutions without either institution learning anything more than that the asset they back has been transferred.

The right to trigger the land subdivision process shown above cannot be enforced on-ledger. The commune or higher authorities have to be trusted that they will honor the on-ledger agreement and perform their roles in the process to decide whether the request is accepted or rejected.

Daml makes this very explicit. No party can ever become a signatory on a contract without their consent. Having the commune as a signatory on LandRecord means they may be an obligable party under the rights encoded in the contract, and that they have agreed to the terms. The signatories of a contract are those that have to be trusted to uphold the rights described and maintain the on- off-ledger link.

Daml and its API are to distributed applications as SQL and ODBC are to centralized ones. The clean interface between data and logic specification, the underlying storage infrastructure, and the client application consuming the data makes applications portable without re-engineering.

This abstraction makes Daml easier to learn and faster to develop than other smart contract languages and tech stacks. The developer need not concern themselves with the detailed mechanics of the infrastructure they are planning to deploy to, and system-level concerns are kept out of the language completely. By learning one language and one API, app developers are able to develop applications for local deployment, clouds, and distributed ledgers.

It also de-risks and accelerates the development of distributed applications. Applications can be developed without worrying about which infrastructure is the right one to pick, both for current and future needs. They can be developed and prototyped on entirely different infrastructures than the production deployment. Daml supports a wide range of infrastructures, from local database-backed solutions, to cloud-hosted ledgers, and all the way to fully public blockchains true to the Daml Ledger Model.

The presence of smart contracts provides for the entire ecosystem of security tokens and the use of blockchain technology for the trading of assets. Daml smart contracts are self-executive programs designed within the blockchain and programmed to execute upon certain conditions being met. This can be considered an extension of the 'if – then – else ' statements in programming, with an increased degree of complexity, accuracy, and dependability. To summarize, what Daml is trying to achieve is not only asset tokenization but a complete ecosystem solution, one in which Daml: